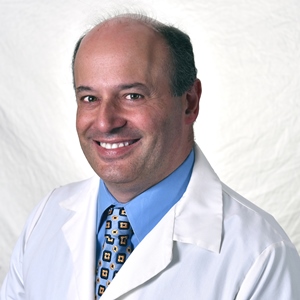 A native of New Jersey, Dr. Steinberg was born in Elizabeth and grew up in Scotch Plains. A graduate of Scotch-Plains-Fanwood High School, he earned a Bachelor of Science degree with High Honors at Rutgers College of Pharmacy and a Doctor of Medicine (MD) degree at UMDNJ-New Jersey Medical School, Newark. Dr. Steinberg completed his internship in Internal Medicine and residency in Diagnostic Radiology at Monmouth Medical Center in Long Branch, where he served as chief resident. He completed a fellowship in Cross Sectional Body Imaging at the Hospital of the University of Pennsylvania in Philadelphia. Dr. Steinberg joined the medical staff in the Department of Radiology at Wayne General Hospital, now St. Joseph’s Wayne Medical Center, in July of 1996.

A man of many interests, Dr. Steinberg enjoys music, cooking, wine and travel. He has attended cooking school in Tuscany and has traveled extensively in the United States and Europe “in search of good food and fine wine.”

Dr. Steinberg and his wife, Robin, have lived in Wayne for 18 years. They recently celebrated their 25th wedding anniversary. They have two children, Amanda, a senior at Rowan University, and Matt, a sophomore at the University of Alabama.